Head spinning with all the intergalactic trade that’s going on in FWOT? Pizza burning a whole in your pocket whenever a new premium item falls from the skies into our stores?

Yes, the temptation with games like FWOT is just to buy, buy, buy!!! But do this and before you know it you’ll be sitting counting the costs as your Pizza will disappear faster than Fry when there’s work yo be done!!! So we’re here to help you decide what’s worth spending your precious Pizza on,  and what’s not as it’s just plain old space junk. Today we’re going to talk about Chris Hardwick. 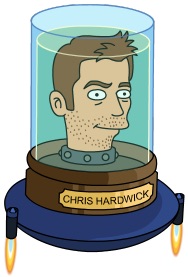 Release Details: Limited Time Release as part of the An Auditory Adventure event. Only available until the end of the event. So this will be leaving our stores on 20th September 3pm PDT (That’s GMT-7)

So with the above in mind Would I Buy? Well here’s my thoughts…..

If I were playing Premium: Well if you’ve more Pizza lying around than your local Dominos I’d say you should probably snap him up. He’s the man who got the Futurama cast back together for Radiodrama and I think that earns him is place in the game, even if you’re not a fan. And as for his usefulness those D-Waste File drops will come in very handy. Also I just like these floating heads.

If I were playing Freemium: I’d save your Pizza as I think at 210 Pizza there are better core Futurama Characters out there to buy and others that have still to appear in the store in the future.

Of course, in the end, it’s your decision, we can only tell you what we would or wouldn’t do… But whatever you decide, just make sure you make your final decision before he leaves our games for good.

What are your thoughts on Chris Hardwick? Will you be spending Pizza to bring him to New New York? Did you buy him already? If so, why? If no, then why not?  Sound off in the comments below, you know we love hearing from you!

5 thoughts on “Should I Spend Pizza? Chris Hardwick”