So after a long time in the promoting,  Futurama: Worlds of Tomorrow, (FWOT), finally hit our App stores at the end of June, and now there’s an Addicts site devoted to it I thought I’d do a little post now and then where we could discuss  not only the latest goings on at Futurama, but also FGQFS and Tapped Out (TSTO).

As I previously admitted, I decided I needed even more madness in my life and am now playing all 3 games. It’s like a full-time job with a lot of unpaid overtime expected.

So what are my thoughts on the 3 games just now. Well they are all frightfully ghoulish as something wicked this way has come as Halloween has finally made an appearance. Yes al 3 games launched their much-anticipated Halloween events this week.

And just what thrills and chills have they brought us?

Well over in Quahog,FGQFS is giving us all the jeepers creepers as Hannibal Lecter has come to town, and he’s invited a few friends to join him for dinner in A Very Griffin Holo-ween. Just for starters there’s Buffalo Bill, Axeman Peter and we’re even getting a helping of Texas Chainsaw as we use them to deal with some Zombies that have stumbled into town. And with more to come I’m hoping I’m not left a few body parts down come the main course.

TSTO has gone the opposite route to Halloween and decided to put the magic back in our life’s with its more genteel spooky event, here the monsters are so tame even kids can banish them. Yes THOH XXVII is based around magical characters, such as Angelica Button, and mythical creatures such as Wiggop. But i think we’re quite safe to wander our Springfields this Halloween, as it’s more a case of who ate all the donuts rather than who ate all the town citizens.

And over at FWOT we find ourselves in a level of hell that not even Dante could have imagined. We’re dancing with the devil, the robot devil, whilst our citizens are terrified by Robot Incubots, and the only escape is to head into Space to a dead planet. Yes the Halloween event in FWOT really is too hot to handle as we find ourselves in Robot Hell On Earth.

So there’s plenty to keep us out of trick or treating mischief there eh? But are they a gore fest or a snore fest?

Well I’m enjoying FGQFS so much I’ve opened a nice bottle of Chianti to toast yet another fun Halloween in Quahog. More epic horror movie characters to roam in the psychopath playground in my town, and some new twists on gameplay. It’s looking positively frightful. So it gets a gore fest thumbs up from me.

Over at TSTO I’m wishing I had my own magic powers in order to make these 3 Act events disappear, this tired formula is what’s turning this event into a hellish nightmare rather than the new scary content. It feels like Groundhog Day, only the groundhogs even given up and gone home. But I am enjoying the mythical beasts element, but for me the magic was gone before it ever really started, and I don’t think Harry Potter himself could save it, never mind Angelica Button. However I’m addicted so I’ll play, it’s easy so takes no great effort, but sadly this event is getting a snore fest rating from me.

And over in FWOT, well so far I’m finding this a devilish delight. We’re going to wander through robot hell and hopefully dance with the Robot Devil. Sounds like just the thing to keep my idle hands busy. Throw in a Space Mission to a dead planet, fire bombs, Villian Class and Devilish Fry, and this event is shaping up to be a definite gore fest.

But it’s still early days as we’re only a few days into 3 events that will run for over a month, so plenty of time for EA and TinyCo to have a few tricks or treats up their sleeves that will lead to more spooktacular content in our games. But on the early content, how do I rate my 3 favourite games. Well there’s been a change since my last post, as FGQFS has returned to top spot, however FWOT is a very close second, but TSTO stays in third, it just can’t seem to get off the bottom spot. 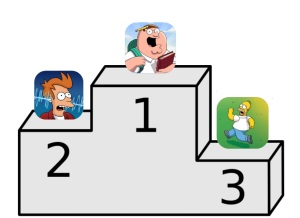 But that’s just my evil thoughts, now I want to hear yours, but only if you think they are safe enough broadcast on a public forum.  Oh and Brooders if you’re reading this we got Zombie Pirates over in Quahog.

28 thoughts on “Futurama Thoughts, with a sprinkling of Quest For Stuff & Tapped Out on top!!!”