You need not fear us, we come on a mission of mercy to give you a quick guide to getting started on the latest Space Mission to appear before us. 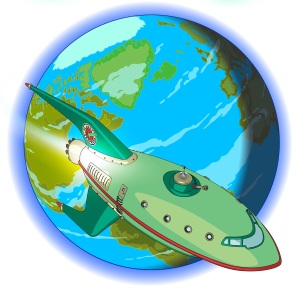 Space is quite literally the Futurama frontier, it’s where us Addicts boldly will find limited time Space Missions where you’ll fight intergalactic villains and gather resources essential to an Event.

These Space Missions can be complex and take considerable time to navigate, but sometimes we forget there is an easier way, a simpler path to success so to speak and these Space Mission Snapshots will be a very basic guide to help you plot the best course to complete a path. Remember this is not a guide to get 100% completion, you’ll find help with that once the complete guide goes up, this is just to help you on your way. And what way are we heading today? Well to Earth 9 to plot a quick path through the Come Hell Or High Water Space Mission.

As you can see above Come Hell Or High Water is a less complex maze of Paths that resembles a Devils Fork. Many of the paths require unlocking with a high level Character and/or Class but for this snapshot guide we’re only going to take you through the easiest path to get you on your way and that path is unlocked from the go. You can repeat this path as many times as you want, fuel permitting obviously.

So now we’ve got that bit out-of-the-way let’s move forward and follow that path.

Combats: 10 (the enemies I saw on my first run at the path were as follows, however please remember these are random so could differ in your game)

Rewards Stats
Path Rewards: 5 Giga Career Chips
Total Combat Rewards: 50 Robot Souls & 8 Robot Snake Metals, 2,Incubot Metal & 1 Robot Moth Metals
Total Interaction Rewards: As these rewards are determined by multiple choice answers in your Interactions, what you will get depends on what choices you make but on this path there is xp & Career Chips up for grabs.
Path 1 Completion Reward: 2 Giga Career Chip, 5 Pizza, 54 Robot Souls

WHAT WILL HELP ME COMPLETE THE PATH?

Ok, this isn’t a set in stone list, it’s just a bit of guidance based on my own successful run at this.

Okay there’s a number of Enemies that will pop up over the 10 Combat stops, Chapek Guards, Chapek Robots, Anti Human Patrol and Robot Elders are mostly easy enough to defeat if you follow my advice by taking high level characters on the mission. However there’s now 3  enemies that are truly hellish to defeat, the new Robot Snake, the second wave Robot Moth and the First Wave Incubot and you’ll encounter at least 1 at every Combat stop.

And yes they are as tough as they look, therefore this is where those Fire, Thunder & Water Bombs  you’ve been making in the Bomb Factory will come in handy.

Basically as I said both of these enemies are a nightmare to defeat as they have a permanent high defence shield which means even if you critically hit them you on,y do -1 damage. So if you don’t have any Fire, Thunder or Water Bombs you are going to have to slowly grind away attacking them until their health is fully depleted, and with 10 Combats you’re talking about 2 hours to complete the Path without Bombs. So we really don’t want to be doing that if we can avoid it. So keep your Bomb Factory at work and build up some Fire, Thunder & Water Bombs before you head into Space because remember hitting them with the correct Bomb kills them outright so be careful not to use the wrong Bomb on the wrong enemy:

And remember you can simply repeat this Path to keep collecting Snake Metal, Moth Metal and Incubot Metal, you don’t need to go on to the locked paths unless you want to 100% complete the Mission.

And there you have it fellow space travellers, all the quick data on taking the easy route through Come Hell Or High Water? Have you tried this Mission yet? Did you complete it or find it Mission impossible. Anything we missed or tips for fellow players? Tell us in the comments, as you know we love hearing from you.