Welcome to a whole new level of hell. Where the robots are bad right down to their nuts…. and bolts. Yes, it’s getting hot in the city where the Incubots roam so feel free to hide in your closet as you read this, as we’re going t bring you all the frightful facts about Episode 2 – Robot Hell On Earth.

Please click HERE to be taken to the Event Page where you’ll find links to all the posts related to the Robot Hell on Earth event.

Robot Devil Boss in event area. More on this later.

You’ll need to have completed Part 6 of Evil Ways to trigger the Fifth Wave main Questline, The Robot Devil You Know, Fry gets things going.

The Robot Devil You Know Pt. 1

The Robot Devil You Know Pt. 2

The main event currency is Robot Souls, and you can get these from:

The other essential materials are: 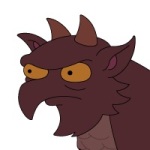 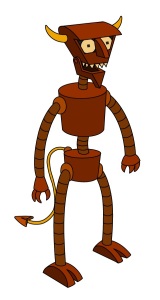 Robot Devil (New Character – Villain): You will need to complete the tasks in the Eternal Suffering Quest to bring him into your game 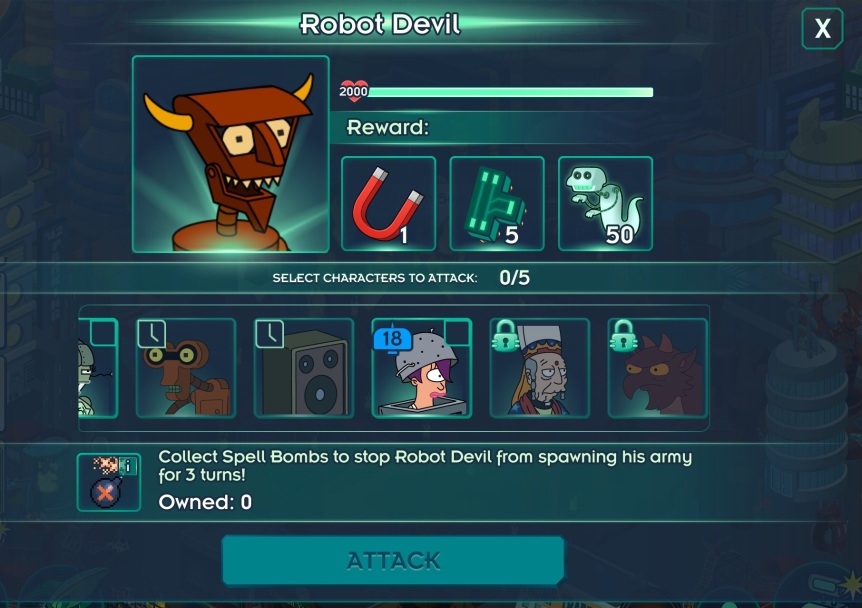 This is triggered once you reach Pt. 2 of the main Questline, and will see the Robot Devil boss appear in event area. You have 24 hours in which to defeat him. If he doesn’t appear please force close your game and restart your game.

To attack him the hard way you’ll simply need some characters free. The characters that can be used can be seen by tapping on the Robot Devil boss. Please note characters but be unlocked and not on a task, ie free and wandering your NNY to be used in an attack. And I repeat you DON’T need a Spell Bomb to attack.

However to make these attacks easier you can use a Spell Bomb, to get this you will need to collect 1 Wing of Buggalo, 2 Eye Of Amphibians & 1 Wart Of Omicronian then go to your Bomb Factory to create your Spell Bomb, it takes 2 hours. 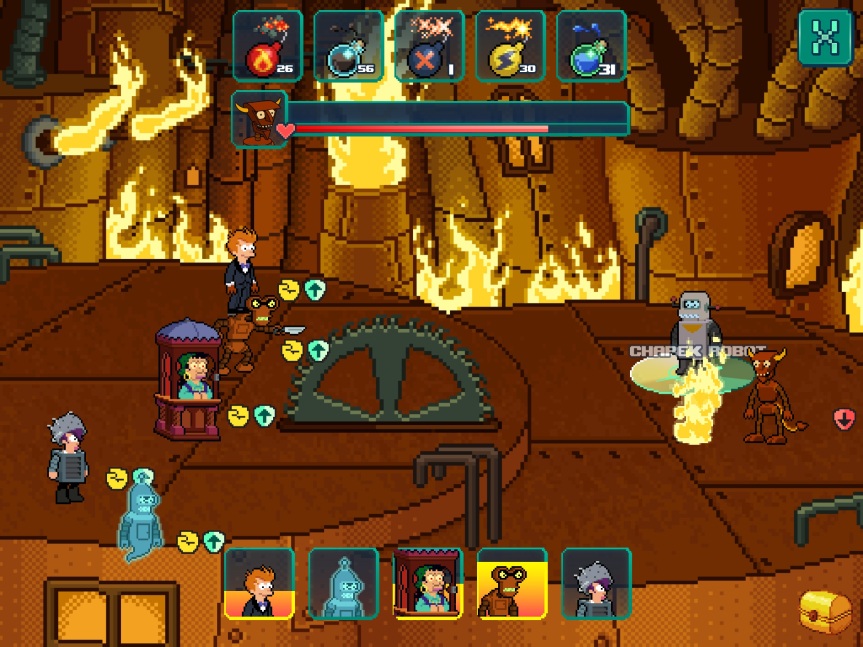 Now I know this all looks daunting and different but underneath it’s really just a Space Mission, and the Robot Devil enemy’s attack is to summon another minion enemy into the battle, so basically as you kill enemies off he can create replacements. So you want to get to damaging him ASAP. You’ll know your damaging him by his health bar. 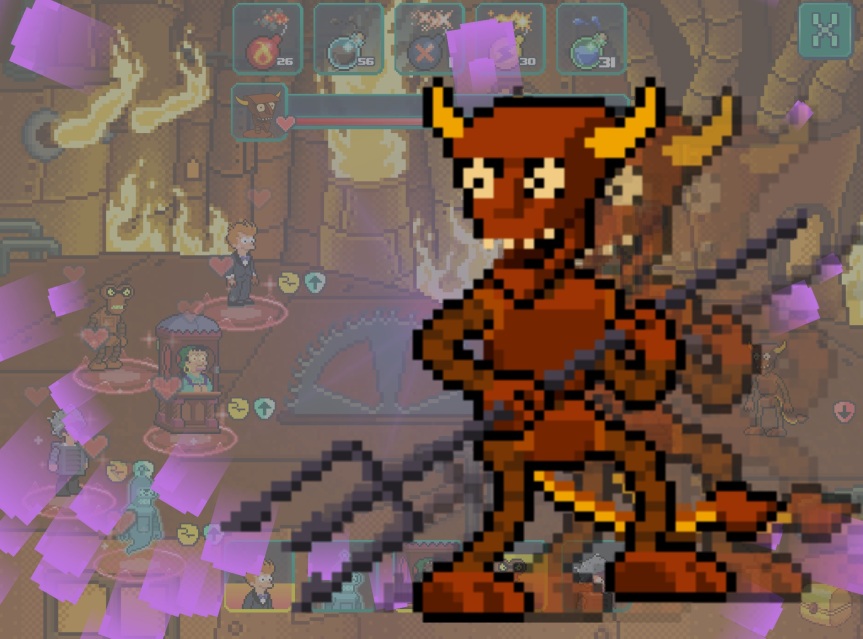 To do this, make sure take a high Level team that includes Roberto and a couple of influencers, especially if you’re going to try this without a Spell Bomb. Then simply chip away at the enemies and get Roberto to debuff their defences, and keep going until you’ve defeated the Robot Devil. Remember to use your Influencers to keep your health up. You can use the other earlier waves bombs but most did little damage, and I honestly didn’t need to use them so save them for your Space Missions.

So that’s the bomb-less battle, but Spell Bombs will make things even easier as each one used puts a temporary hold on Robot Devil spawning new minions, for 3 rounds of battle he’s basically out of commission. So use these to speed up the kill. But as I say you don’t need them to succeed.

Once you’ve defeated the Robot Devil by reducing his 2000 health to 0, you’ll get your rewards. Although I my game the reward box showed nothing but I was awarded the  Magnet. 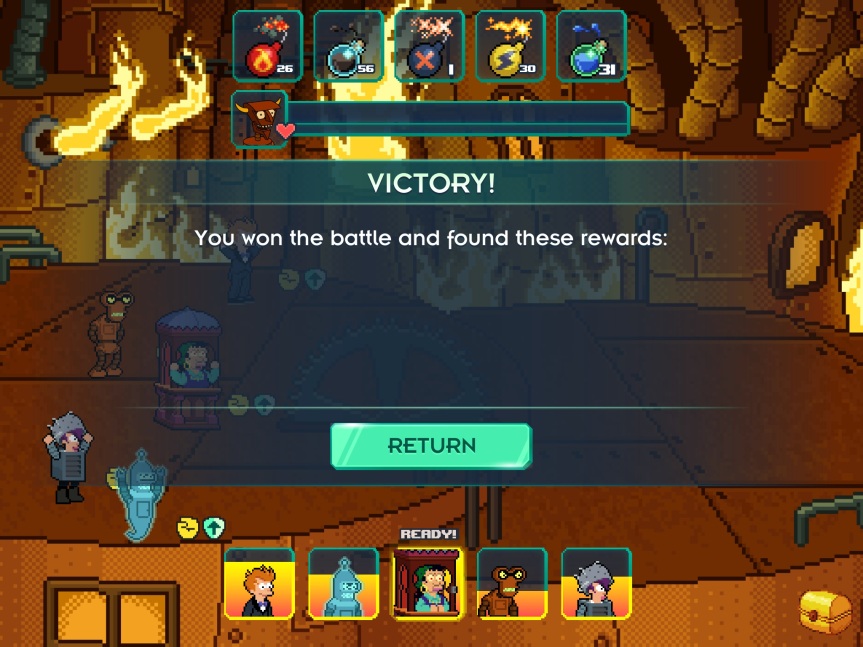 Once defeated he’ll be back in 4 hours for you to fight again. You can bring him back sooner by paying Pizza, this starts at 40 Pizza at 4hrs and reduces as the timer ticks down to his return. 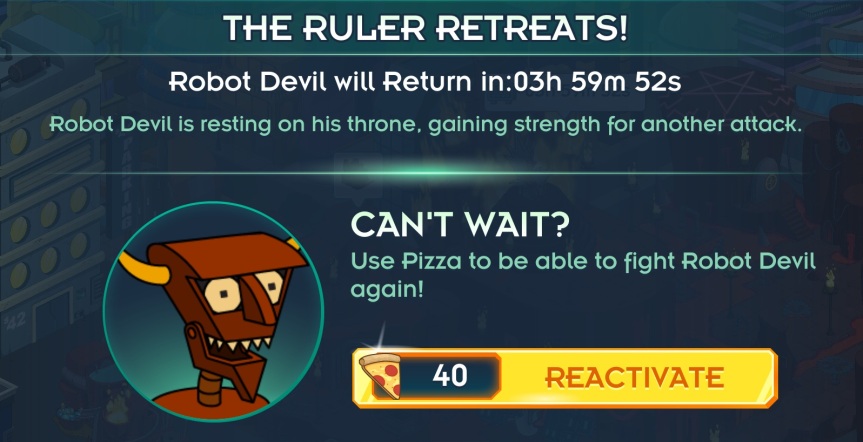 And if you loose, his health you depleted won’t regenerate until after the 24hr timer expires, so you can just chip away at his health.

Ok, how do you deal with Enemies in space? Well with Bombs of course, and here’s where you’ll make them.

But first you’ll need to gather the resources for the 6 types of Bombs currently in use.

To create 2 of the new Spell Bombs you need, 1x Wing of Buggalo, 2x Eye Of Amphibians & 1x Wart Of Omicronian. Takes 2 hours.

Once you have the necessary resources you can select the type of Bomb you want at the top of the screen, a yellow box will show the bomb type you’ve selected, then simply tap “Create” to start building your Bombs, you can build up to 6 batches in your queuing system. Please note you can only hold a maximum of 50 Bombs in your inventory at any time. 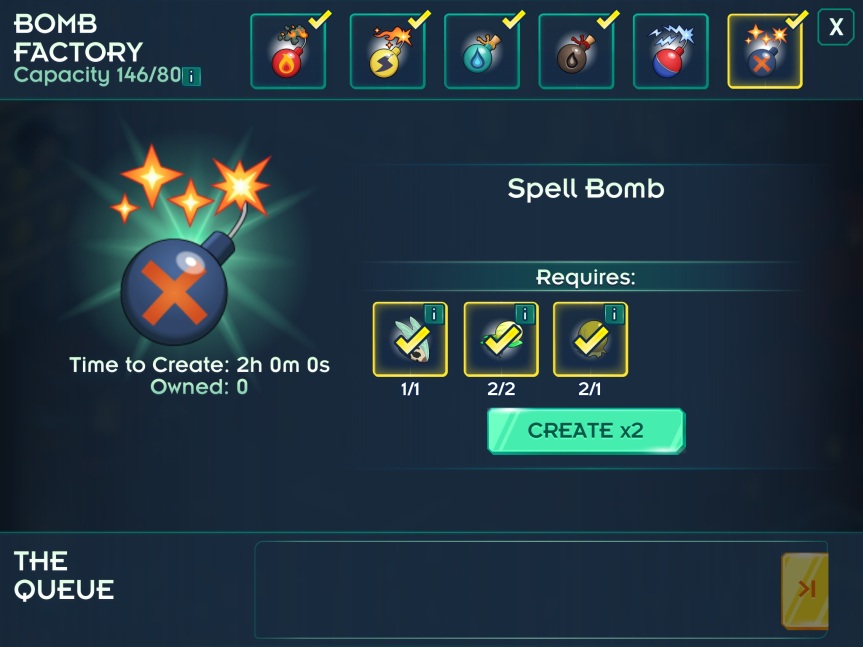 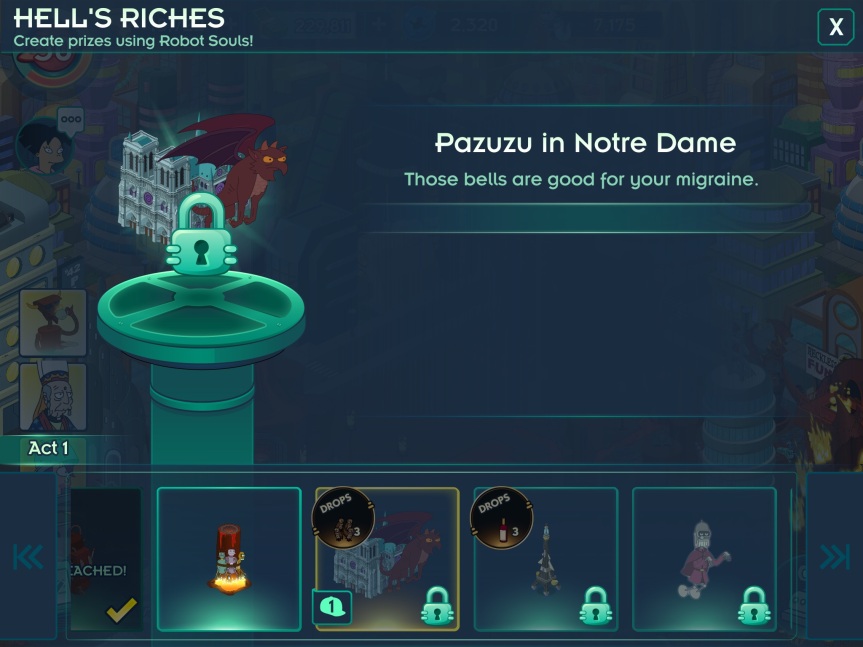 Here is where you will trade Materials you collect while playing the game to unlock Buildings & Decorations to use to further your game play in the Event.

Here are the items you can unlock during the Fourth Wave…. Please note I’m still pulling unlock costs and will update this ASAP. 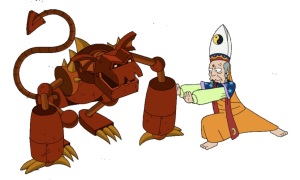 You will see Robot Gargoyles on your sidewalks once you reach Pt 5 of the main Questline and you need to put a Character on a task to clear them. The Robot Gargoykes have 40 Heakth and there are only 2 Characters that can deplete this, Father Changstein El-Gamal and Pazuzu. Simply tap on a Robot Gargoyle, and you’ll bring up the attack screen. 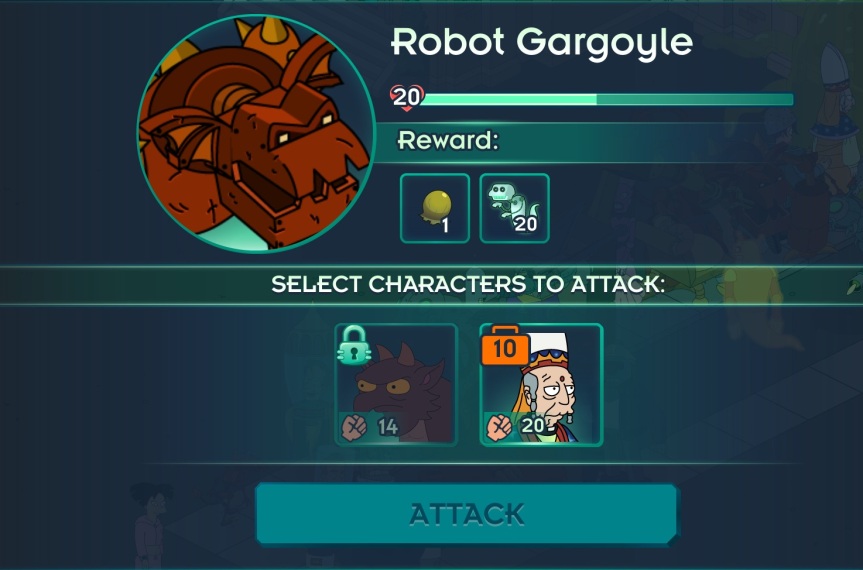 Simply select your character and hit attack, each attack takes 2 hours and the amount of damage done depends on the level of your character used. Simply repeat the task until the Robot Gargoyle is cleared.

And we’re on our travels again, as this final week of the event brings us 1 new Space Mission to complete. It’s located on Earth and will unlock when you reach Part 5 of the  Main Questline. This mission isn’t as complex to navigate but will still take time and resources, and you can’t ignore it forever as it’s the source of the Robot Gargoyle Metal you’ll need to progress. And the good news is you can do it bombless using Roberto and a good high level crew.

There you have the overall Basics that I can give you for the final wave of Episode 2: Robot Hell On Earth event.

What do you think of it so far? Any tips for fellow Players? Any items you’re frightfully excited about? Any items you immediately purchased? Let us know in the comments.