You need not fear us, we come in peace and only wish to supply you with information. And today’s out of this world mutterings concern Space Missions.

Space is quite literally the Futurama frontier, it’s where us Addicts boldly go to fight intergalactic villains and to gather resources. Want to know more? If so, join us after the fold.

So where are we off to today space raiders? Oh yes, you’d better buckle up cause we’re heading to Neptune to take a closer look at the Doom On Neptune Mission and the Snowbot 4000 Boss.

These are the enemies I met on my first time completing the path:

He is triggered once you reach Pt. 7 of the main Questline, Jingle Hell, and this will see the Snowbot 4000  boss appear in the final combat of this mission.

To attack him the you’ll simply need some characters alive by the final combat. 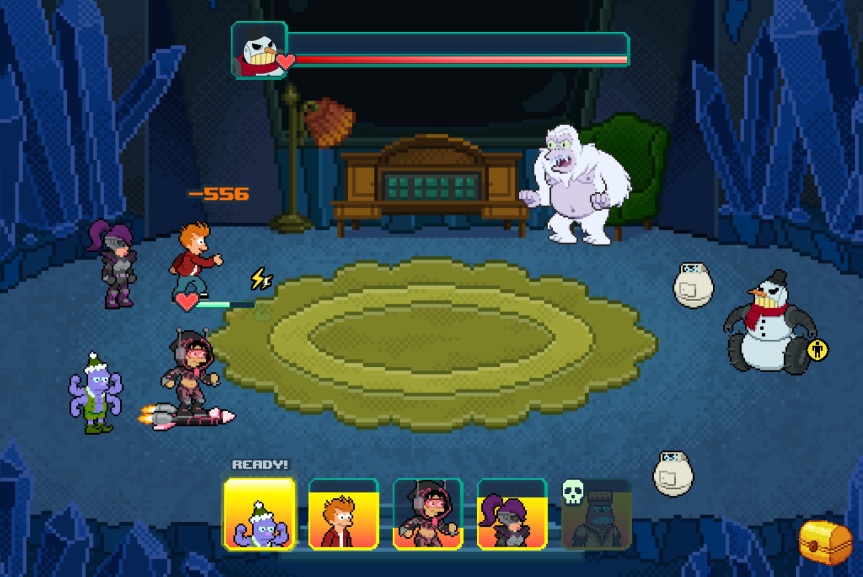 Now I know this all looks daunting if you’re a new player, but as I said it’s really just a Space Mission, and the Snowbot 4000 isn’t that tough if you have levelled up your crew to the required 27, however remember his special ability is to summon another minion enemy into the battle, and you must kill that minion in order to attack him, as released minions offer him protection from damage. You will also see the new electrify passive being used on you, but don’t sweat as it’s not going to cause you any issues as long as you have that L27 crew.

So basically as you kill enemies remember his special ability can let him create replacements, so you want to get to damaging him ASAP. You’ll know your damaging him by his health bar depleting.

So simply treat it like other missions and chip away at the enemies and Snowbot 4000 until you’ve defeated him. Remember to use your Spacial Abilities and once Snowbot 4000’s minions are defeated it’s just you against him, so attack and take him out.  Once you’ve defeated the Snowbot 4000 by reducing his health to 0, you’ll get your combat rewards which include the Snowflake Medal.

And there you have it fellow space travellers, all the data on the Doom On Neptune Mission. Have you tried this Mission yet? Did you complete it or find it Mission impossible. Anything we missed or tips for fellow players? Tell us in the comments, as you know we love hearing from you.