So it’s time for your characters to climb the career ladder, yes they now need to take that one giant step for man, robot, alien, mutant or woman kind and reach that coveted 4 star rank that will see them start their journey towards the ultimate goal of being your first Level 99 character.

And I’m going be honest from the start here, this isn’t going be easy, hell it’s not supposed to be, TinyCo brought this new ranking system in for many reasons, but the main one is to slow down the speed freaks. the flip side of slowing them down is it will keep the rest of us busy for a long time, a very long time.

So that leads to my point, levelling up is now supposed to be a very slow process, more of a space odyssey than a warp speed sprint.  So I thought I’d run a ranking up experiment to see just how much this change has put the brakes on players. And after running my little experiment I can’t help but wonder if TinyCo really meant it to be this slow or arduous. I honestly hope note, and wonder whether we can expect changes somewhere along the lines to help players level up a little less painfully than is currently possible.

Might we see new ways to earn star badges, a reduction in Daily Planet mission fuel costs, or a helping hand with Nixonbucks, or more to the point our lack of them. I honestly don’t know. I hope help is on its way, but my advice is to hope for the best but don’t bet your pension on it happening.

First up as much as there’s a lot of words, this post is actually about numbers, and showing how tough it is promoting a Level 60 character to Rank 4, it’s not about getting your player to Level 60 to start with, this post is long enough without starting at the very beginning. And I’m not going to go into great detail in this post about the mechanisms of levelling up either as we all know the new system, but I will do a little recap of the new Ranks and their levels. But this post is really just to test out how to get a 4-Star Ranked character, whether it be by your time or your dime! And maybe to show TinyCo just how tough this is. 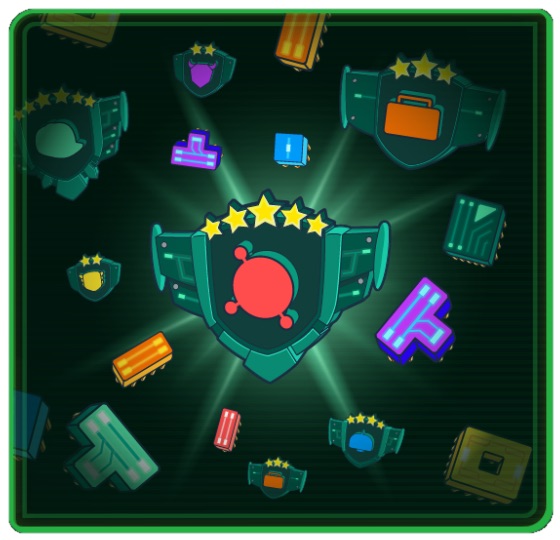 So let’s take that in context of what I’m trying to do here. I’ve chosen the character Lrrr who I just got at the start of the Alpha event and who obviously like all characters starts at Level 1. Then came the big promotion push to get him to Level 60, I levelled him up using Nixonbucks, Badges and Chips I had sitting in the hope he’d be mine. Some grinding in the Daily Planet over that weekend let me get him to 60. Then I got stuck as I had  to promote him to Rank 4 and that’s where the fun began, actually that might be where the fun stopped as here’s how I ground out the eight 4-Star Captain Badges & the eight 4-Star Generic Badges.

I warn you now reading on is not for the faint hearted or impatient.

So there’s an easy way to promote a Level 60 character to Rank 4, and WillBits talked about this in great length in his Math comment which you can read HERE. But to summarise the quickest way to get the combination of sixteen 4-Star Badges required is to buy them. Easy peasy but, yes there’s always a but, it’s going cost you 3,000 Pizza. How much? Ok let me check, yes, that’s right, 3000 Pizza!!! That’s because you’ll need to buy 10 Rank 3 Captain Bundles which cost 300 Pizza each. This will give you eighty 3-Star Captain Badges & eighty 3-Star Generic Badges, which you can upgrade in your store for all the 4-Star Badges required to promote your character from Rank 3 to Rank 4. So yeah it’s easy work, but only if you can find 3,000 Pizza lying around, which is unlikely.

If I wanted go that path in my personal game it would cost me £85.00 in real money to buy that 3,000 Pizza to get Lrrr to Rank 4. That OUCH just got louder. So being reasonably sane, or maybe more honestly reasonably poor, I’ve diverted from this path, onto another path….. the grind it out path.

= Rank 4 the hard and harder way

And now to the hard ways, and for most of our budgets the only ways. There’s the fast hard way, that’s done by buying Fuel refills or the slow hard way which entails waiting forever for free Fuel refills. What way you go will depend on how you feel about spending Pizza on fuel refills. To grind this information out, I was willing to do the former.

Now before I start throwing stats at you, be aware I had five Level 60 crew, and ran the L45 gated paths on the 4-Star missions used. I was also maxed out at the then current game Level of 60 which saw my fuel capacity at 84.

Now down to business, Lrrr is a captain, so he needs eight 4-Star Captain Badges and eight 4-Star Generic Badges.

Now although I have 5 Level 60 crew the level 60 Daily Planet missions were still too tough for me to win with my team, so I was left running the 3-Star Missions and trading up the 2 and 3 Star badges I won to get 4-Star badges. And yes while I was prepared for the grind I had no idea it would be quite so brutal. By the end I felt like I’d been put through WillBits grinder 91 times, as that’s how many times I ran the missions. By the way if you want to see WillBits grinder and his grind you’ll find it HERE.

But before you run off to see that, finish reading this.

So here’s the missions I used:

So just how hard was it and what did it cost me, apart from my sanity. Well here’s how many of each mission it took me to get enough 2 and 3 Star Badges to upgrade to the eight of each type of 4-Star Badges.

Ok, deep breath time, I had to run this path 48 times to get enough 2 and 3 Star Badges to trade for the eight 4-Star Generic Badges needed.

Those 48 runs used 1152 Fuel, and of that I bought 840 through 10 Fuel refills, the rest came from free timed refills. Buying fuel let me get what I needed quite quickly compared to trying this freemium using only timed fuel refills. If you wanted to do this with no pizza spend you’re looking at needing 192 hours of refills, that’s 8 days. And of course whether that gets you what you need depends on your drops.

But that’s just the start I then had to wait for Monday 4PM PST to come around so I could grind out the eight 4-Star Captain badges and that went as follows.

Ok, take another deep breath time, I had to run this path 43 times to get enough 2 and 3 Star Badges to trade for the eight 4-Star Captain Badges needed.

Those 43 runs used 1032 Fuel, and of that I again bought 840 through 10 Fuel refills, the rest came from free timed refills. Buying fuel let me get what I needed In 1 day compared to trying this freemium using only timed fuel refills. If you wanted to do this with no pizza spend you’re looking at needing 172 hours of refills, that’s 7 days. And the mission only appears for 1 day every week, so it would take you over 7 weeks to run those 43 missions, and of course whether that gets you what you need again depends on your drops.

So what did all that grinding get me apart from repetitive strain injury. Well it got me enough 4-Star badges to rank up Lrrr, well once I had enough Nixonbucks to use them. And it cost me 500 Pizza, a lot less than the 3000 price to buy the badges, but it used up something more valuable to me, my time. And yeah I got a little buzz seeing that promotion go through but it was a hell of a lot of work to get there, and it made me ponder on a few thoughts that I hope TinyCo will look closely at.

Now this isn’t supposed to be an I hate the new system post as honest it’s not, I actually like it, I just don’t like how it was brought in and how hard it is! It’s one of those things that can transform a game or strangle it, and at the moment it is sadly doing the latter but I’m ever hopeful we’ll see movement from TinyCo that will see us able to gather resources quicker or for them to pull back on the increasing level requirements in Missions. I don’t mind it taking time to get a Level 99 character as long as the game isn’t requiring us to complete any gameplay requiring these levels until players get a chance to get there. But looking at the recent Alpha event and the current Island of Lost Bot Mission requirements, TinyCo seem to think we are either levelling up a lost faster than we are. They need to stop, listen to us players and pull back a little.  And after all that I think that’s enough said!!!

And my Cargo Hold rewards breakdown for each run of the missions incase you’re interested were as follows:

There you have it, the overall basics of the options available to gain, or grind out those 4-Star Badges.

And once again big thanks again to WillBits for use of his Lrrr and  for his virtual entertainment during my long hours in Space.

What do you think of levelling up so far? Any tips for fellow Players? Any items you’re frightfully excited about? Any items you immediately purchased? Let us know in the comments.