Yes it’s time for us to become lovers not fighters as it looks like  Zapp is bringing his flair for peaceful negotiations to New New York with the Zapp Brannigan And The Doop Team Up For War event.

None that I can see in my game.

This is a little tougher than the previous event but not so tough you shouldn’t have fun.

You will promote event characters and outfits with Disks instead of Badges once again.

Try to buy the Channel Square Root of 2 ASAP to start getting its Doop Supply drops going.

The main Questline for this event is A Tariffic War and as requested I’m going to put the main questline post up and update it as I progress, you’ll find it by clicking the quick link above!!!

There’s a number of side questlines to guide you through the event game mechanics, try to follow these to maximise your material payouts.

Pizza and all his tasks drop Purple Hearts at rate of 3 for every hour of a task. You must have Zapp to purchase this outfit.

Yes the sticker book continues to be back in business and you’ll find 4 new pages, these are A Deserted Race, Thought Control, Slug It Out and Shark Tank. And I’m  very glad to report pizza is the reward for all of these. 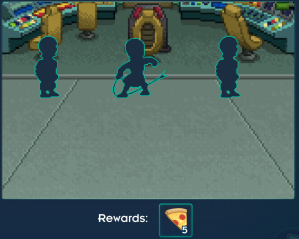 To Complete Collection: You must reach the targets of defeating 25, 75 and 150 Osirians. 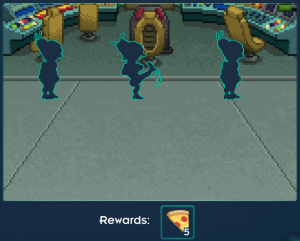 To Complete Collection: You must reach the targets of defeating 25, 75 and 150 Brain Slugged Female.

Collection: Slug It Out 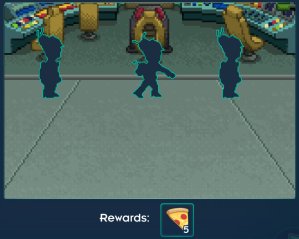 To Complete Collection: You must reach the targets of defeating 25, 75 and 150 Brain Slugged Males.

To Complete Collection: You must reach the targets of defeating 25, 75 and 150 Carcarons.

The main event currency at this time is:

The main event materials are:

Youl’ll grab yourself the following rewards by collecting Doop Supplies to complete the Supply Run Questline: 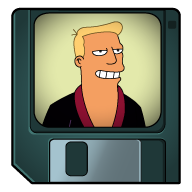 You will not use Badges to promote the event characters and outfits, instead you will use Disks. Yes, the very same Disks you had to collect to unlock some of the new outfuts. Here’s this weeks promotion costs. However remember this is simply to promote them, it does not include the costs in Chips and Nixonbucks to get them to the promotions levels of  10, 30 and 60.

The first War Effort Space Mission will unlock when you trigger the main Questline, then each subsequent mission will unlock as you complete a path on the previous one. They start off very, very easy and the difficulty starts to increase as usual as the missions go on, but they aren’t that hard. But the bad news is you’ll use increasing fuel per stop to run these missions although they aren’t particularly long.  1-6 cost 2 Fuel per stop, 7-11 cost 3 Fuek per stop. You can only run each mission once. You’ll find the link to the overview post in the Quick Links at the top of this post.

The Sub Space Missions will start to unlock when you reach A Tariffic War Part 1, and they have the new function whereby you can choose whether to run the map  at one of three difficulty levels, Easy, Medium or Hard.  Fuel costs are cheaper at 1 per stop for easy paths, 2 for medium paths and 3 fuel per stop on hard paths. You’ll find the link to the overview post in the Quick Links at the top of this post.

There you have the overall Basics that I can give you for week 1 of the Zapp Brannigan And The Doop Team Up For War event. What do you think of it so far? Any tips for fellow Players? Any items you’re excited about? Any items you immediately purchased? Let us know in the comments.

5 thoughts on “Zapp Brannigan And The Doop Team Up For War Event – Week 1 Overview!!!”