Head spinning with all the intergalactic trade that’s going on in FWOT? Pizza burning a whole in your pocket whenever a new premium item falls from the skies into our stores?

Yes, the temptation with games like FWOT is just to buy, buy, buy!!! But do this and before you know it you’ll be sitting counting the costs as your Pizza will disappear faster than Fry when there’s work yo be done!!! So we’re here to help you decide what’s worth spending your precious Pizza on,  and what’s not as its just plain old space junk. Today we’re going to talk about Lionel Preacherbot.

every 3hrs
Building Drops: None

Release Details: Limited Time Release as part of the Robot Hell On Earth event. Only available until the end of the event. So this will be leaving our stores on 8th November 3pm PDT (That’s GMT-7)

Futurama Facts: Lionel Preacherbot is unsurprisingly a preacher at the Temple of Robotology, and has appeared in many episodes of Futurama, usually presiding over weddings or funerals. When he’s not doing that you’ll find him trying to cure robosexuslity or welding.

So with the above in mind Would I Buy? Well here’s my thoughts…..

If I were playing Premium: Well if you’ve more Pizza lying around than your local Dominos I’d say you should pause before you buy. Yes he’s a Preacher, and that might encourage you to donate pizza to his cause as you want to add  him to your character collection. If tats case, go for it. On the other hand I’d your considering buying him for his event usefulness, as his drop is Glass Globe is only useful if you can get enough of the other resources to build extra Water Bombs, and Corks and Water aren’t quick to come by. I’m finding Glass Globes the easiest of the bomb supplies to gather and I’m sitting with 6 at the moment but no Corks or Water to be able create bombs.. You will find you will use him to clear the Robot Snakes to get extra Water drops.

If I were playing Freemium: I’d save your Pizza as I think at 260 Pizza there are better Characters out there and some may appear in the store for you to snap up in further Phases of this event. You’ll also get enough Glass Globes elsewhere, as I say it’s the Corks & Water that seem to be the hold up for me.

However one last things I’d like mention is the Temple of Robotology building, you get this with him and it’s a mighty fine looking building as you can see. 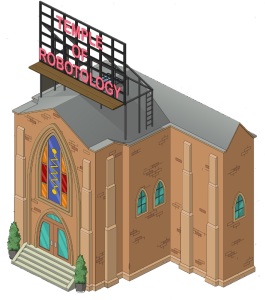 Of course, in the end, it’s your decision, we can only tell you what we would or wouldn’t do… But whatever you decide, just make sure you make your final decision before he leaves our games for good, (or at least for now, I’m sure with him being a Robot he’ll be back, one day).

What are your thoughts on Lionel Preacherbot? Will you be spending Pizza to bring him to New New York? Did you buy him already? If so, why? If no, then why not?  Sound off in the comments below, you know we love hearing from you!

5 thoughts on “Should I Spend Pizza? Lionel Preacherbot”