So it’s time for our obsession gene to kick in as TinyCo is dangling that 100% Mission completion carrot in front of us again. Well it’s more a pizza popper or 2 they’re dangling but who cares about such tiny details? Well we do, that’s who. So I thought I’d do a quick math post, I’m having to do it as the Professor is still trapped in a nudist void, so forgive me if 2+2=42. 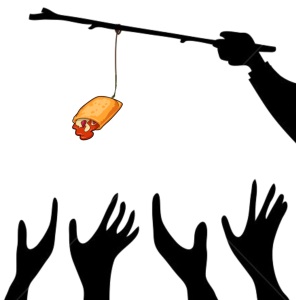 So you’re a young innocent gamer and blindly wander into New New York, grabbing a load of Level 1 characters as you go. Lucky you!!! Now let’s just say those characters you picked up miraculously match the 19 required for the Island of The Lost Bots Phase One space missions. More luck. When will this lucky streak run out, well the minute you look at the Gate requirements you need to run all the paths on the 10 new Earth event missions, that’s when. Yes, character upgrade requirements such as Hunter Bender level 57, Smitty Level 79 and Hedonismbot Level 79 stand between you and those 20 Pizza Poppers waiting for you for 100% completing EVERY mission. Yes I know you’ll also pick up 2 pizza poppers for each first path you complete as well, so that’s another 20. But 2 Pizza Poppers for 100% completing each of the 10 missions, some of which require crews exceeding Level 50, well it’s not exactly a finger lickin’ bucket full of rewards but for many that just doesn’t matter. As completing these missions isn’t about the rewards but their OCD, (Obsessional Completion Disorder), it’s this that dictates the path or paths they follow because for me and many others there’s no buzz quite like that buzz you get when you see that 100% flash up.

Okay enough talk about our compulsion and the pizza poppers it will earn us, it’s only making me twitchy and hungry. Let’s move onto the math, actually no let’s not, first let’s look at the motley crew you’ll need and their levels if you want to play the 100% OCD game.

That’s a whole lot of levelling up eh? And just what would it cost to get your characters from their starting level of 1 to these levels, well a lot more than what those 4 pizza the 20 pizza poppers you’ll get for doing it all will get you.

Here’s the totals of what you’ll need to raise all these characters from Level 1 to their required gate level.

And how much fuel will you need to run every path? Probably enough to power a small nation. Yup I was right as you’ll need at least 1807 fuel.

Who’s not got that lot lying around waiting to be used? And it’s definitely worth spending for those 20 pizza poppers isn’t it? Eh no, it’s not but that won’t stop some of us idiots, I mean long-term completion addicts considering it. We just need to see that 100% at the end of our space travels, it’s just the done thing. But is it possible with the stakes raised so high on a limited time event? No, not unless you’re a trust fund kid.

And it whilst think about  all that, I started to wonder what it would cost me in Nixonbucks, Peta chips & Rank Badges to level up my characters from their various levels to hit these missions up for 100%.  And thanks to some mental calculations of my own and the help-o-tron I know it will cost me a whopping 11 million Nixonbucks, an eye watering 6,582 Peta chips and 302 Badges of various ranks. And all this for 20 Pizza Poppers which equate to 4 pizza, which I can get in a minute or two watching 4 ad videos in the game. Yeah, that’s how crazy the 100% reward is for a fortune in resources and hours and of mission grinding. So as I say it’s definitely not about the Pizza Poppers, it’s about the OCD in us.

And if reading all that’s not brought your OCD to its knees and you to your senses and you’d like see how much it will cost you in Nixonbucks and Chips to level up your characters from their current levels you can get this from the help-o-tron, you’ll find it by clicking HERE, once you input your characters you’ll be taken to a second page where you’ll find the calculator on the bottom right of your screen, well that’s where it is on my IOS devices. As for ranking badges you’ll need to count them on your fingers, toes, and anything else you can find. And if you do work it out, let us know how much it’s going cost you and whether you’re considering it in the comments.

And with thst I’m off to decide what to spend 4 pizza on.